Seeing the Road Ahead with LED

Seeing the Road Ahead with LED

Hello everyone!  It’s been a while!  Has anyone been sick recently?  I have, that’s why I’ve been MIA.  When I got the sore throat and the stuffy head last Sunday, I knew I was in trouble.  It all hit full-force Monday, and I could barely get out of bed Monday night to call in to work.  It’s been a rough week.  Added to that, we can say call in to the place where I used to work.  Yep, they devastated me by laying me off on Friday (the 15th).  The doom and gloom surrounding that, I think, made me even sicker.  Today’s the first day I’ve been feeling well enough to do much of anything, so I figured this should be one of them.

One of the things we did was go to our local Boy Scouts of America Council to look at uniforms for our son.  He’s joining his friend’s den as a tiger cub.  The stuff is expensive, so we settled for getting the neckerchief and slide.  We wandered through the store, looking at the various badges and pins and awards he could earn.  There were also various hats, including a very cool one – LED-wise.  It’s the BAS® 3D Logo Power Cap, which features two ultra-bright LED lights concealed under the brim of the hat.

The two, 5 mm lights are larger and stronger than the previous model of the hat and are angled at 7.5 degrees to help light the path ahead.  They also cast a wider beam, apparently, than the previous model (which I’ve never seen).  The LEDs also produce a light output of 47 lumens, and you’ll be able to light your travels for 50 hours before replacing the batteries.

The microfiber cap features the BSA® raised 3D logo emblem and “Boy Scouts of America” embroidered in white on the black cap.  Can’t wait to get my hands on this one! 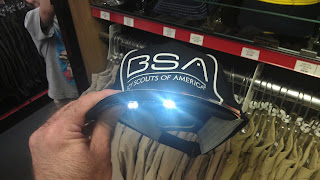 Note: my husband is holding the hat, my son is off to the left.  This is a picture we took ourselves and does not need to be credited to another source.
Posted by KeriWriter at 10:18 PM