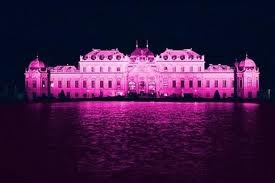 Every few months while listening to the radio or watching TV I hear “It’s Estee Lauder gift time at (insert department store name here); buy $21.50 (or whatever the pricemark may be at that time) in Estee Lauder products and receive a free gift worth X amount of dollars.” Since no one sees me on a day-to-day basis besides my family – and they love me for the way I look – I don’t wear much makeup. I’m wearing some now, because I had a couple job interviews today. I confess, none are Estee Lauder products. This latest piece of news is changing my mind. Estee Lauder is teaming up with Philips to launch a partnership as part of The Estee Lauder Companies’ Breast Cancer Awareness (BCA) Campaign. Now, breast cancer is a personal issue for me. My mother is a survivor. She was undergoing treatment back in 2006 and was unable to come to Phoenix to see the birth of her first grandchild because her doctor said she couldn’t put off the final treatment. She got the final treatment and she packed her wig and her skull caps and she and my dad met their two week old grandson.

The Estee Lauder/Philips partnership will use environmentally-friendly LED lighting technology to wash some prominent landmarks in pink. The companies hope the campaign will raise awareness about breast cancer and the importance of breast health and early detection on a worldwide scale. Women over 40 are encouraged to get an annual mammogram, and those with a history of breast cancer (like me now) should start earlier.

The 2011 BCA Campaign’s Global Landmark Illuminations Initiative marks 12 years of casting light on a disease that, if localized and detected early has a cure rate of over 90 percent. As Philips’ part in the campaign, it is using its power and versatility in LED lighting to illuminate the worldwide landmarks in a more energy-efficient way.

Some of the 200 or so landmarks included in the list include the Philips headquarters in Amsterdam, La Grand Palais in Paris, the air traffic control tower at JFK International Airport and the Hard Rock Hotel & Casino in Las Vegas.

In a time of economic uncertainty, many small businesses have had to close their doors for good. I have a handful of friends who have either had to close for good or take part-time jobs and work evenings and weekends to pay their personal and business-related bills.

That doesn’t seem to be the case for LED Source, a company specializing in LED lighting and based out of Wellington, Florida. LED Source recently joined an elite group. It is one of the 5000 companies that recently made Inc. Magazine’s list of Top 5000 private, employee-based firms in the US. LED Source ranked number 1533 overall in the Inc. 500|5000 – a list highlighting the top, growing, privately-held American companies.

LED Source has been able to outshine nearly 3500 other companies. That’s because it has seen an average growth of 40-50% every year since being founded in 2005. It also saw leaps and bounds in growth in October 2009, when it successfully launched a franchise program. LED Source now has successful franchise locations in Eastern Canada; Bloomington, Indiana; Dallas, Texas; Des Moines, Iowa; Lawrence and Wichita, Kansas and Los Angeles, California. On top of that, LED Source is planning franchises in Western Canada, Colorado, Hawaii, Illinois, New York and San Francisco. From that, LED Source expects about 30 new franchise agreements this year, along with a total of 20 locations in operation by the end of 2011. LED Source also became the first and only LED lighting company in North America to have a franchising program.

LED Source supplies LED lighting products to both American and international firms. It specializes in full-scale evaluations and retrofits through its Retrofit Division. The company also provides consultation services all the way up to supplying products through their Architectural and Entertainment Divisions. The company’s product is most often used in art galleries, churches, commercial office space, landscaping, nightclubs, residential, restaurants, schools, special events, theaters and so much more.

When I think of a 10-city tour, I don’t think LED lighting. What comes to my mind is a singer, band, celebrity, or – now that it’s election season – presidential candidates. Maybe some of the tons of equipment these people bring along utilizes LED, but the tour isn’t about the lighting but about the person or persons featured. But the star of this tour is in fact the lighting.

Royal Philips Electric, or better known to those in the US as Philips Lighting North America or just plain Philips, is climbing on the tour bus. They’ll be bringing an interactive mobile exhibit featuring LED technology. The Philips LED Light Experience is a free exhibit which will demonstrate, in a hands-on environment, what LED does in brightening up your home and your bank account.

Philips Lighting was the first to introduce LED bulbs equivalent to 60- and 75-watt incandescent bulbs. The bulb that will be most on display is the pioneering Philips AmbientLED A19 bulb. The bulb uses about 80% less energy – 12.5 watts – than the standard 60-watt incandescent. A Philips spokesperson said the exhibit allows visitor to see and understand the best way to integrate LED bulbs into their homes and how well LEDs can mimic the qualities of incandescent bulbs in terms of light color and quality.

The exhibit includes designer tips for using long-lasting LEDs through a “lightover” and allows visitors the chance to see the “inner workings” of the Philips AmbientLED A19 bulb. There will also be contests to enter and other giveaways.

The tour makes 24 stops throughout the 10 cities. It started September 3 in Chicago. The exhibit will stop at festivals, retailers, trade shows and many other events. It travels westward to stops in California, Oregon and Washington during the rest of September. The unique exhibit then heads east again for dates throughout Massachusetts, New York and New Jersey during October. The tour winds up in mid-November back in California.

Royal Philips Electronics of the Netherlands, the parent company, is located in the Netherlands and has over 120,000 employees in sales and service in over 100 countries across the globe. 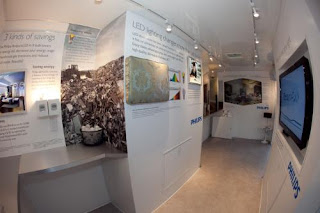 om
Posted by GS Blogger at 5:14 PM No comments: